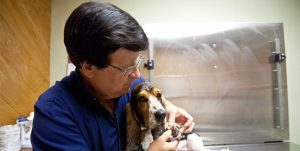 Dr. Richard Rossman is the medical director and founder of Glen Oak Dog and Cat Hospital in Glenview, Illinois. He received his bachelor’s degree from the University of Illinois in 1965 and his doctorate in Veterinary medicine in 1969.

As a veterinarian, Dr. Richard has a special interest in animal allergy and skin disease. He has been treating the area’s most difficult skin cases for almost three decades.

He proudly served his country as a captain in the U.S. Army. During his military career, Dr. Richard served as the preventative medicine officer for troops stationed at Camps Henry and Walker in Taegu, South Korea, from 1970-1971.

Dr. Richard also served as the commanding officer of his detachment. The military awarded an Army Commendation Medal for his epidemiological expertise. He discovered the cause of a gastrointestinal infection (shigella) which affected 600 troops.

Service to the Glenview Community

Dr. Richard lives with his wife in Northbrook and shares his home with Chase and Shana, his German shepherds. He is an avid golfer, ice dancer and he serves on the board of the Skokie Valley Skating Club. He also enjoys flying his airplane, amateur radio, and photography.